Wind Power Vs. Solar Energy: Which Is Better?

When it comes to choosing a green energy source, there are plenty of options, but wind and solar top the list. There has been an increase in the demand for more sustainable and renewable energy alternatives for homes and commercial usage.

Solar and wind energy plays a critical role in reducing our carbon footprint, dependence on fossil fuels, and pollution. There’s no doubt that both are practical and effective alternatives, but the question is which one is better for you.

In addition to providing employment opportunities and cutting down pollution, these energy sources can provide power to the most densely populated and rural regions of the world.

In this blog, we’ll break down everything you need to know about solar energy and wind power.

Wind power is a form of renewable energy generated when moving air spins the blades on the large wind turbines. Once the blades on the turbines begin spinning, kinetic energy is created, which is later converted into mechanical energy.

The mechanical energy produced is sent to the turbine’s generator to be converted onto electricity. What’s more, wind energy is considered a form of solar energy. This is because the wind is created when the sun heats the earth’s surface. 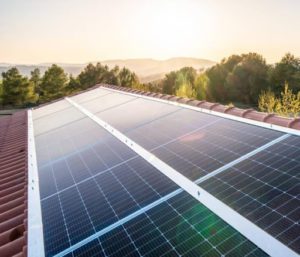 What’s more, the excess energy created during the day can be stored.

Bottom Line: Which is Better?

Both wind power and solar energy have their pros and cons. The option you choose for your home or commercial property depends on your requirements and budget.

While wind turbines can generate a larger amount of electricity than solar panels, they cannot be installed in urban areas or largely populated areas. Plus, they harm wildlife and are way too noticeable.

Even though no energy source comes without its drawbacks, your energy requirement and location play a vital role in which energy source you opt for.

Best Solar Solutions in Portland, ME

Whether you want to install solar panels or a solar battery, All Solar Energy Solutions is your trusted partner. We are well-versed in all types of solar solutions and systems and have experts ready to help you out.

Reach out to us for more details.

No comments to show.